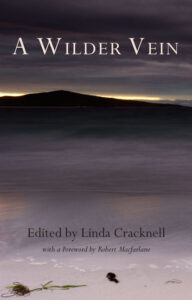 Just a quick post to mention that A Wilder Vein, the non-fiction anthology focusing on the relationship between people and the wild places of Britain and Ireland, in which a prose piece of mine appears, is now available as an e-book at the Two Ravens Press website.

Edited by Linda Cracknell and with a foreword by Robert Macfarlane, the anthology received some very enthusiastic reviews when it was first published in 2009:

A Wilder Vein (edited by Linda Cracknell; Two Ravens Press. £10.99) is an anthology linking writers with the natural world. Its theme is the wilder places of Britain, and its object an exploration of “new ways of seeing”. One way, articulated by Gerry Loose, is to follow what the writer sees almost in real time, taking in tiny details: the way young holly sprays from an oak or how scabs of lichen decorate the rocks. A landscape, suggests Robert Macfarlane in his foreword, is defined not only by what it is but by the way we see it: “certain thoughts might be possible only in certain places”. If we lose those places, we are losing kinds of imagination too. – The Independent – a recommended book for Christmas 2009.

Here is a book in which 18 writers – poets, novelists, anthropologists and natural historians – visit the uninhabited regions of our crowded little archipelago and meditate on what these places mean; and while individually the results are often sparklingly written and utterly transporting, taken together they also reinforce a point Macfarlane makes in his introduction: that “certain thoughts might be possible only in certain places, such that when we lose those places, we are losing kinds of imagination as well” – The Scotsman