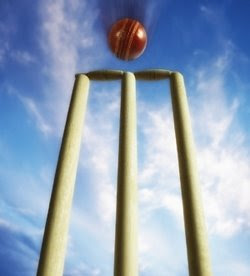 The deadline has now passed for a poetry competition for which I’ve been asked to be one of the adjudicators, for the best poem about cricket by both a primary and secondary school pupil in Wales.

The competition, jointly-run by Glamorgan Cricket and Academi, is part of the celebrations to mark the first-ever Test Match here in Cardiff, between England and Australia, in July. As someone who’s been a huge cricket fan from childhood onwards (I’ve already bought my ticket for Day Three of the Cardiff Test!), I’m really looking forward to reading all the entries.

Here’s the press release that announced the details of the competition:

‘Schoolchildren throughout Wales will have a unique opportunity to take part in the celebration of the npower Ashes Test Match at Cardiff on Wednesday 8 July 2009 following the launch of a schools poetry competition, run in conjunction between Glamorgan Cricket and Academi.

During the winter months, Glamorgan Cricket have been working closely with their partner schools in Wales – currently totalling over 300 – and they have now invited them to submit poems for this exciting competition for which the prizes include tickets for the opening day of the Ashes Test at Cardiff.

There will also be special certificates for each pupil and the participating schools, whilst a short-list of finalists – from both primary and secondary schools – will be drawn up by an adjudicating panel of eminent Welsh writers and poets including Dannie Abse, T. James Jones and Susan Richardson.

The pupils on the short-list will be invited to an awards ceremony in Cardiff during June, and for two schoolchildren in Wales, this will be a red letter day as they will find out who has won the competition and will be present for the first-ever day of Test Match cricket in Wales.

“This is a once in a lifetime opportunity for pupils at schools throughout Wales, “ said Andrew Hignell, Glamorgan Cricket’s Heritage and Education Manager who has overseen the development of these initiatives. “The two winners of the competition will not only get a chance to see the first day’s play in the npower Ashes Test, but they will also see their work being used by Glamorgan Cricket in the lead-up to the game, and in the aftermath, as we also have plans to compile an anthology of work about what should be one of the most memorable cricket matches ever held in Wales.”

Peter Finch, the Chief Executive of Academi said: “As we shall certainly see from this contest the gap between sport and culture is nothing like as great as many imagine. Watch out for sparks!”

Alun Ffred Jones, the Minister for Heritage, whose portfolio includes sport and the arts, said: “It is great to see a competition that links two of my great interests, sport and literature. It is a fact that cricket has inspired better writing that any other U.K. Sport and I’m sure it will bring out the best in our young people in developing their literary skills with the pen to order to see the best cricketers show their skills with the bat and ball. Good luck to everyone you who enters.”