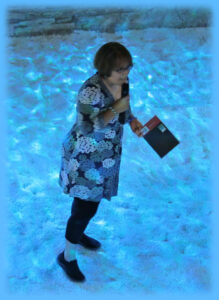 It was, without a doubt, one of the most interesting venues in which I’ve been lucky enough to perform. As the photo on the left suggests, I was submerged for the evening in the ruins of the Roman Baths in Caerleon – though what looks like water is actually just a very effective watery projection!

I mostly shared poems from my new collection, Where the Air is Rarefied – and realise I will never again have such a perfect location in which to perform the opening poem, Nerrivik, about the Inuit goddess of the sea!

This Bathhouse Bard event was part of the annual Caerleon Festival, to which I was making a return visit, having first appeared there back in 2007. This time, I was joined by creative writing students from the University of Wales, Newport, plus several local writers, all of whom read a selection of their poetry in the first half of the evening.

Many thanks to Maggie Corke for organising the event (and for her superb post-performance supper!) Thanks, too, to Brian Dawson for the photograph.