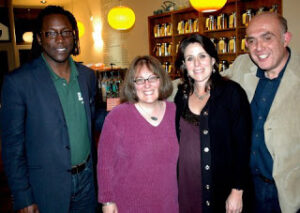 Almost one week on, I’m finally getting around to blogging about the highlight of last week – the Cardiff book launch of Blood, Sweat and Treason, the autobiography of defender of democracy in Zimbabwe and former international Test cricketer, Henry Olonga.

The event was organised and hosted by my partner, Russell Holden, founder and director of In the Zone, a Sport and Politics Consultancy. It took place in the delicious Waterloo Gardens Teahouse in Cardiff, where I was lucky enough to offer several poetry readings and exhibit the work from my collaboration with printmaker Pat Gregory earlier this year.

Last Wednesday’s event justifiably attracted a big audience – a mix of cricket fans and those who were interested in Henry’s political protest of 2003, when he and team mate Andy Flower wore a black armband at a World Cup Match to symbolise the death of democracy in Zimbabwe. It was fascinating to hear Henry both speaking candidly about his protest and the momentous impact it has had on his life and career, and reading extracts from his autobiography, recently longlisted for the William Hill Sports Book of the Year Award.

Friend and photographer Rhys Jones came along to the event and, as usual, took a range of photos that perfectly captured the atmosphere. Thanks to him for the pic that accompanies this post, showing Henry, me, Tara (Henry’s lovely wife) and Russell, once the event was over and we could relax with yet another pot of wonderful Waterloo Tea!

3 responses to “Blood, Sweat and Treason”