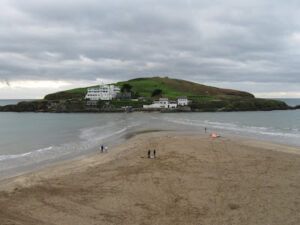 I went on another island visit on Saturday, to go along with the other island adventures (the Scilly Isles, Flatholm, the Orkneys, Caldey…) that I enjoyed, and blogged about, earlier in the year. This time I travelled to Burgh Island, off the south coast of Devon, by sea tractor! At high tide, this vehicle chugs, with its chunky wheels on the submerged sandy causeway, across to the island, while the driver and passengers perch on a platform several feet above the rising surface of the sea.

Though Burgh Island is only small, it’s packed with historical and literary associations – Noel Coward stayed in its Art Deco Hotel, as did Agatha Christie, who used it as the setting for two of her murder mysteries, while the fourteenth century Pilchard Inn is said to be haunted by the ghost of an Elizabethan smuggler.

With so many other commitments and deadlines, I’m making slow progress with my sequence of island poems at the moment but Saturday’s trip has given me the incentive to try and prioritise it in the weeks ahead.