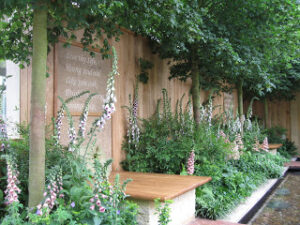 I’m finally catching up with everything which means I can at last write a few lines about my one-day poetry residency with BBC 2 at the Chelsea Flower Show last week.

I really enjoyed the whole experience in spite of it being quite high-pressured and compressed! I arrived at the Show mid-morning, whizzed around the gardens (there was already a bit of a poetry theme going on, with the QVC Garden, pictured above, containing engraved quotes from Keats and Tennyson), grabbed some lunch from the BBC catering van and then got to work on writing my minute-long performance piece in response to what I’d seen. I was then escorted to one of the show gardens to perform it to camera in front of a large and enthusiastic crowd (they’d seen all the tecchie people in BBC jackets and were probably hoping Alan Titchmarsh was due to arrive for some filming rather than me!)

Later, I went up on the terrace from which the 8 pm evening show is broadcast to speak with Alan T. and the other presenter, Joe Swift, and to perform the second, shorter poem that I’d been asked to write. Strangely enough, I felt quite relaxed at this point (or maybe I was just exhausted!). Since I’m more used to doing gigs in front of a live audience, the fact that there were just cameras watching made it much less edgy for me; it felt more like I was there for a friendly chat!

You can watch the result for one week only on the BBC’s Listen Again facility (I’m on about two-thirds of the way through and then again right at the end). I feel so lucky to have had this experience and it’s certainly whetted my appetite to do more TV work, should I ever have the chance.