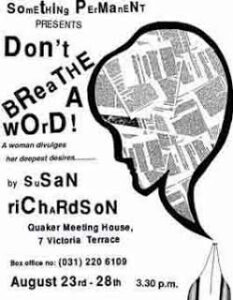 I have quite a few events and activities to blog about from the past few weeks, not least the performance of my play, Don’t Breathe A Word, at three South Wales venues – Chapter in Cardiff, the Dylan Thomas Centre in Swansea and the Riverfront in Newport. The production was part of Michael Kelligan’s On the Edge series – this season he’s featuring plays by Welsh women writers including Gwenno Dafydd, Lucy Gough and Gillian Clarke.

I wrote Don’t Breathe A Word almost two decades ago when I was living and studying in Toronto. It was subsequently performed by Something Permanent Theatre Company at various venues and festivals including the Edinburgh Fringe, and British Council funding also enabled us to tour University venues in Helsinki, Turku and Tampere in Finland. The poster, below, is from one of those early productions.

At first I felt quite ambivalent about having it performed again so many years on. Would it feel dated? Would it sound naive and overwritten? Would I be able to sit through a whole performance without leaping to my feet and yelling ‘Stop! Edit! Too wordy! Too sentimental!’

Well, I’m pleased to report that in spite of my pre-production anxieties, I feel very happy to have revisited it. It was imaginatively directed by Bethan Morgan and performed with great energy and sensitivity by Polly Kilpatrick and Rebecca Knowles – they brought out both the humour and poignancy in exactly the way I intended. I’ve since received some lovely feedback and would very much like to be involved in more theatre projects again in the future.