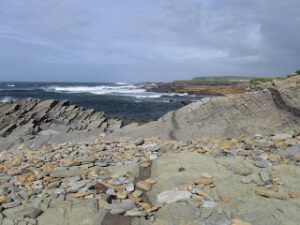 Have been away – hence the fact that I haven’t blogged here for a while. Went up to the Orkney Isles off the northwest tip of Scotland. I’m perpetually drawn to the North and, over the last five years, I’ve been lucky enough to travel to, and write about, Iceland, Greenland, Labrador, Finnish Lapland and the Faroe Islands. Orkney’s been on my wish list for quite some time and it turned out to be every bit as inspiring as some of those other, more far-flung northern destinations.

Did some spectacular coastal walks, both on the main island (known as the Mainland!) and on Westray, one of the northernmost islands in the archipelago. Saw lots of animal- and bird-life, including seals, skuas, fulmars, guillemots, kittiwakes and puffins. And visited some exceptional prehistoric sites, my favourite being Maes Howe, a neolithic chambered cairn, which I first read about in ‘Findings’, the beautiful anthology of travel pieces by Scottish poet Kathleen Jamie. At the time of the winter solstice, rays from the setting sun apparently stream through the low entrance passageway and illuminate the whole chamber – astonishing that it should have been positioned so precisely for this magical effect to take place.

I’m brimming with ideas for new poems – not least for the island sequence that’s been brewing in my brain for a few months now. Must set aside time over the next few weeks to start writing them.

5 responses to “Home from Orkney”