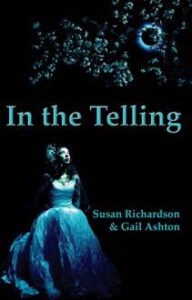 Very excited to have received my complimentary copies of In the Telling, the just-published anthology of narrative poetry that I co-edited with Gail Ashton for Cinnamon Press, through the post today!

It’s been a two-year project from our initial proposal to this moment of holding the published book in my hand. In response to our call for submissions, we received over four thousand poems from all parts of the UK, USA, Canada, India, Bangladesh, Italy, France… There were comic poems, tales of personal and global disaster, poems of love between all kinds of different beings from Glaswegian teenagers to green peas! Image after image was spun, woven, unbuckled, unwrapped…

Not surprisingly, the selection process was long and challenging. My least favourite part was sending out all the rejection emails – mainly because we had to say ‘no’ to so many strong pieces of writing but also because I really don’t enjoy being on the receiving end of rejection emails myself! It’s all been worth it, though – Gail and I are feeling very chuffed with how the book reads and looks. After so many hours spent poring over so many poems, then doing all the ordering and layout, I can hardly believe it’s actually published!

If you’d like to order a copy (£7.99 UK delivery; £8.99 elsewhere) please visit the Cinnamon Press anthologies page and scroll down until you get to In the Telling.

2 responses to “In the Telling is Published!”