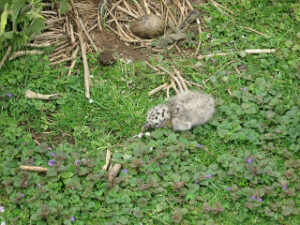 Having recently been seized by the urge to write some island-inspired poems, I took myself off to Flat Holm yesterday. As its name suggests, it’s the flatter of the two islands in the Bristol Channel and it was probably the first island to capture my imagination as a child, ever-visible as it is from both Somerset and South Wales, the two places where I grew up. Until yesterday, though, I’d never actually visited it.

The boat trip from Cardiff takes about an hour and visitors get to spend three hours ashore, most of which is taken up by a guided walking tour of the island. At this time of year, it’s impossible to avoid walking through the resident breeding colony of lesser black-backed gulls – they weren’t quite as fiercely territorial as the arctic terns I encountered in Iceland, but were still pretty fearsome. Dealing with all the dive-bombing and squawking was worth it, though, as I got to see gull chicks that were just-hatching from their speckled eggs, as well as damp-and- sticky gull chicks that had just hatched (see photo above – looking alarmingly lifeless and inert, though I was assured it was due to the effort it had just expended).

I was also introduced to a slow worm (which looks like a snake but is, in effect, a legless lizard). It coiled its beautiful copper-striped body round my fingers and this turned out to be an unexpected wildlife highlight.

I would have liked the opportunity to wander and explore alone, but visitors don’t get a chance to do this away from the tour group. Still, I made lots of notes, took lots of photos and hope that a damp-and-sticky Flat Holm poem will eventually hatch…