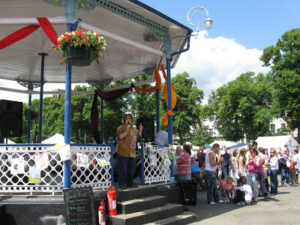 Enjoyed a lovely sunny day at the Leamington Peace Festival on Saturday. Had a half-hour ecopoetry slot on one of the stages, the bandstand, in the early afternoon and performed a selection of my environmental-themed poems from Creatures of the Intertidal Zone.

It was quite a challenging space in which to perform as the bandstand was fronted by a wide walkway through which crowds of people were continually moving, while beyond the walkway was a grassy area where festival-goers were sitting, picnicking and, hopefully, listening! Given the choice, I like to perform in an intimate space where it’s possible to make eye contact with members of the audience and really connect with them – but having said that, I hugely enjoyed the experience, got some very positive feedback and sold some books to boot!

Spent the rest of the afternoon exploring more of the festival – listening to some of the bands and browsing the information stalls. It was such a well-organised, well-supported, friendly event that I wish I could have gone back for more on Sunday!