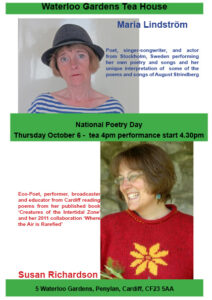 Here are a few of the events I’m involved in for National Poetry Day this year:

1) Last Friday, I was in London, in front of a packed audience at the BBC Radio Theatre in Broadcasting House to record the Saturday Live Poetry Pop-up, alongside the other regular Saturday Live poets. We were each commissioned to write a new poem especially for the event, and were also invited to share poems from past Saturday Live shows. Hosted by Richard Coles and with music by Cerys Mathews, the show will first be broadcast on Radio 4 Extra on National Poetry Day (this Thursday, 6th October, at 10 a.m.). It will also be shown on the BBC Big Screens in city centres up and down the country on the same day.

2) On Thursday, I’ll be returning to one of my favourite Cardiff venues – Waterloo Gardens Teahouse – to perform alongside poet and singer-songwriter Maria Lindström from Sweden. The event is scheduled to start at 4.30 pm, with the Teahouse’s legendary cakes available, as an accompaniment to the poetry and song, throughout the afternoon!

3) Next Sunday, 9th October, from 7 p.m, I’ll be at the Dylan Thomas Birthplace in Swansea, taking part in its first International Festival of Words. Storyteller Amanda Rackstraw and poet Ian Griffiths are among the other performers on Sunday, and there’s a whole range of other poets, actors and musicians appearing at the Festival in the preceding days too.

Post-performance, I’m much looking forward to spending the night in the Birthplace. 5 Cwmdonkin Drive has been restored to its 1914 condition – Dylan’s parents bought it as a new house just a few months before his birth – and it now offers bed and breakfast accommodation all year round. I wonder which room I’ll be allocated…