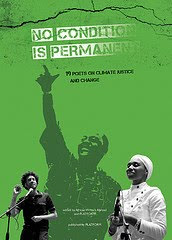 Around this time last year, I blogged about my involvement with C Words, a Bristol-based exploration of carbon, climate, capital and culture, developed and implemented by the arts, social justice and ecology group PLATFORM and several other collaborating organisations.

One of my eco-poems, Prudhoe Bay (which appears in both the social/ecological justice anthology, Dance the Guns to Silence, and my collection, Creatures of the Intertidal Zone) was chosen to be featured at the C Words exhibition, chalked on a huge blackboard in the foyer of the Arnolfini Gallery.

PLATFORM have now just published a slim anthology called No Condition is Permanent, featuring the work of nineteen poets on the theme of climate justice and change, all of which was written/displayed/performed during the C Words season. I’m thrilled that Prudhoe Bay has again been selected to feature in this inspiring anthology.

2 responses to “No Condition is Permanent”