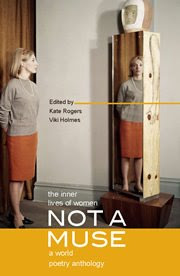 Here’s a press release from Haven Books about the launch of a new anthology of women’s poetry in which several of my poems appear. I’m really looking forward to receiving my contributor’s copy and reading all the other work that’s been included.

And I wish I could be in Hong Kong for the launch – details below!

The Muse Speaks on March 8th

Haven Books announces the launch on 8 March 2009 of Not a Muse, a brand new anthology of world women’s poetry, on the opening night of the Man Hong Kong International Literary Festival and in celebration of International Women’s Day.

“Creator, lover, freedom fighter, explorer, home maker, myth maker… As this stimulating selection of poems proves, there is no such thing as an average woman — a notion upon which we might all care to muse.” — Stephen McCarty, South China Morning Post

Not a Muse: Poetry to Seduce the Senses

Celebrate International Women’s Day with the launch of Not a Muse. In this event, we entertain all of your senses with a live reading from Not A Muse, set to live jazz interpretations by talented musicians Mark Peter and Linus Why. A kinetic display of visual art by local painters and photographers Gukzik Lau, Claire Lee and Madeleine Marie Slavick compliments the very special mood of the evening.

The following Not a Muse contributors will bring their poetry alive onstage at the launch:

This is an official event of The Man Hong Kong International Literary Festival 2009 (www.festival.org.hk). Purchase tickets via www.hkticketing.com; the ticket price is $380 and includes a copy of the book.

About the Editors of Not a Muse

Kate Rogers has had poetry, essays and reviews published in anthologies and literary magazines in Hong Kong, Taiwan, Canada and the UK. Kate has been short-listed twice for the Winston Collins Best Canadian Poem prize by Toronto literary journal Descant: in February 2009 and January 2008. Originally from Toronto, Kate has been teaching writing, literature and English for Academic and Professional Purposes for colleges and universities in China, Hong Kong and Taiwan for the past nine years. Kate teaches in the Division of Language Studies at City University in Hong Kong.

Viki Holmes is a widely anthologised and prize-winning British poet and performer who began her writing career in Cardiff as part of the Happy Demon poetry collective. She has been living and writing in Hong Kong since 2005. Her poetry has appeared in literary magazines and anthologies in Wales, England, Hong Kong, Australia, Canada, Macao and Singapore, and has been translated into Arabic and Chinese.

5 responses to “Not a Muse”