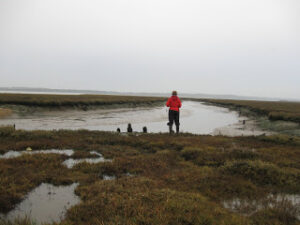 Living in Wales, I’m used to rain and as a dog owner, I’m out walking in it most days. I don’t actually mind it, as long as I’m booted and well-waterproofed. I was, however, wishing for a rain-free Wild Writing Workshop this past weekend when I travelled across to Suffolk, and hoping that the eastern side of the country would live up to its much drier reputation.

Unfortunately, it was not to be. It was fine when I did the recce for the walk – a beautiful route along the estuary of the River Orwell on the Shotley Peninsula – on Sunday morning, but then heavy rain set in about twenty minutes before the workshop was due to begin. All the participants were well-prepared, though, and gamely sloshed through mud and rain as I offered a series of writing prompts that they were to draw on in the indoor part of the workshop later. And in spite of the weather, I must admit that I really enjoyed it.

Post-workshop, I moved on to Arlingtons Brasserie in Ipswich to perform at an evening of Anglo-Welsh Poetry and music, alongside East Anglian-based poets Ian Griffiths and Rosalynde Price and harpist Ceinwen Thomas. It was a really well-attended event – the audience was appreciative, focused and eager to buy books at the end. It was especially nice to chat with a few young people who’d never been to a poetry event before and who confessed they only came along because of the pre-performance meal! Before the event began, they said they felt embarrassed being there, as poetry had a huge cringe factor for them, but they ended up hugely enthused and determined to go to more poetry gigs in the future.

Enormous thanks are due to Suffolk Poetry Society for inviting me to offer both the workshop and performance, and especially to Ian and his artist-partner Carol Lawrence, who shared their lovely home and were so hospitable throughout my stay.